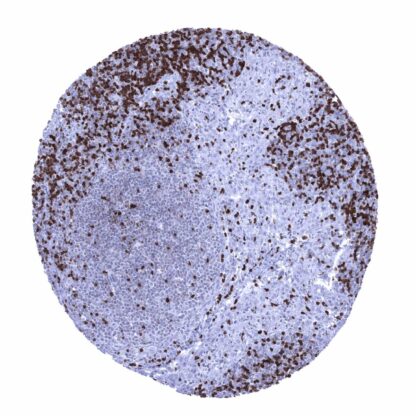 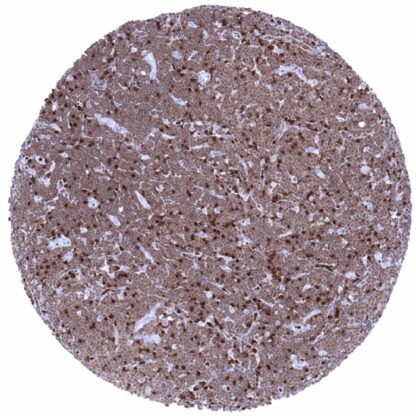 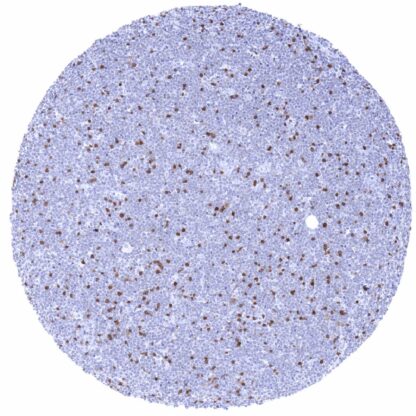 Negative control = Tonsil: ZAP70 immunostaining should be absent in epithelial tissues and the majority of cells in germinal centres.

Application = Immunohistochemistry
Dilution = 1:100 – 1:200
Intended Use = Research Use Only

ZAP-70 is a prognostic marker in B-CLL.

ZAP70 (Zeta-chain-associated protein kinase 70) is a 70 kDa protein-tyrosine kinase coded by the ZAP70 gene at chromosome 2q11.2. ZAP70 is mainly expressed in T cells and NK cells and plays a role in T cell receptor (TCR) activation. Because T cell receptors do not have any own enzymatic activity, they rely on signaling molecules to convey signals from the cell membrane. ZAP70 is a critical cytoplasmic tyrosine kinase that initiates a signal pathway downstream of an activated T cell receptor. Aberrant expression of ZAP70 occurs in a subset of Chronic Lymphocytic Leukemia (CLL) and can also occur in other B-cell malignancies. In B-CLL, ZAP70 expression reflects unfavorable patient prognosis. CLL patients that are positive for the marker ZAP-70 have an average survival of 8 years. CLL patients that are negative for ZAP-70 have an average survival of more than 25 years.[1]

Negative control = Tonsil: ZAP70 immunostaining should be absent in epithelial tissues and the majority of cells in germinal centres.

A positive ZAP70 immunostaining occurs in most T-cell lymphomas and a fraction of B-cell neoplasms. In addition, ZAP70 positive T-lymphocytes constitute a part of the tumor microenvironment of all kinds of neoplasms.

The TCGA findings on ZAP-70 RNA expression in different tumor categories have been summarized in the Human Protein Atlas.

No data available at the moment

IHC users have different preferences on how the stains should look like. Some prefer high staining intensity of the target stain and even accept some background. Others favor absolute specificity and lighter target stains. Factors that invariably lead to more intense staining include higher concentration of the antibody and visualization tools, longer incubation time, higher temperature during incubation, higher temperature and longer duration of the heat induced epitope retrieval (slide pretreatment). The impact of the pH during slide pretreatment has variable effects and depends on the antibody and the target protein.

All images and data shown here and in our image galleries are obtained by the manual protocol described below. Other protocols resulting in equivalent staining are described as well.

Freshly cut sections should be used (less than 10 days between cutting and staining). Heat-induced antigen retrieval for 5 minutes in an autoclave at 121°C in pH 7,8 Target Retrieval Solution buffer. Apply MSVA-870R at a dilution of 1:100 at 37°C for 60 minutes. Visualization of bound antibody by the EnVision Kit (Dako, Agilent) according to the manufacturer’s directions.

Evidence for Antibody Specificity in IHC

There are two ways, how the specificity of antibodies can be documented for immunohistochemistry on formalin fixed tissues. These are: 1. Comparison with a second independent method for measuring target expression across a large number of different tissue types (orthogonal strategy), and 2. Comparison with one or several independent antibodies for the same target and showing that all positive staining results are also seen with other antibodies for the same target (independent antibody strategy).

As a standard orthogonal validation process for MSVA antibodies, RNA data summarized in the Human Protein Atlas (Tissue expression ZAP-70) are used for comparison. In accordance with these RNA findings, ZAP70 positive cells strongly predominated in lymphatic tissues. However, the validity of orthogonal validation is limited for proteins that are expressed in significant subsets of lymphocytes because these cells occur in virtually all organs.

The validation of MSVA-870R is, therefore, also based on an independent antibody strategy using a second independent product candidate (“Validation Antibody 5f7”). This comparison of antibodies revealed identical staining patterns for MSVA-870R and “5f7” in lymphatic and non-lymphatic tissues with identical subsets of lymphocytes staining. Independence of the antibodies is documented by an antibody cross-reactivity to respiratory epithelium seen for 5f7 but not MSVA-870R.

It is of note, that the staining pattern of MSVA-870R also matches the expectations as ZAP70 positive lymphocytes are preferable seen at locations where T-lymphocytes are known to predominate such as in the thymus, interfollicular areas of lymph node and the tonsil as well as in mucosa associated tissues. 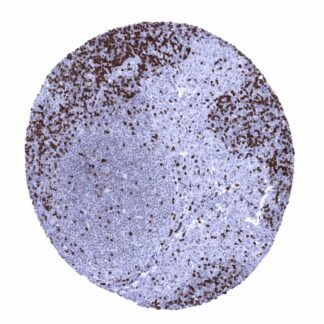