Detects a relevant entry port for the coronavirus causing COVID-19 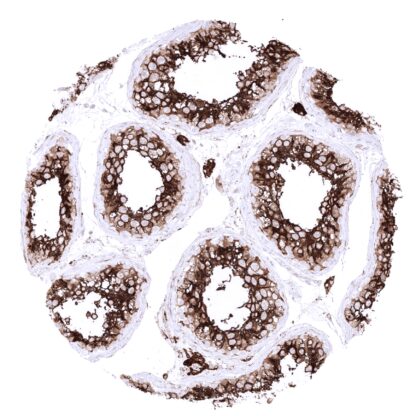 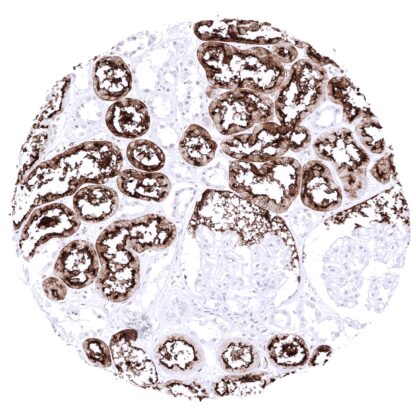 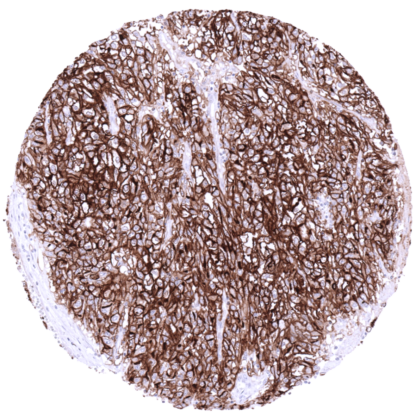 Positive control = Kidney: Cells of proximal tubuli should show a moderate to strong ACE2 immunostaining with accentuation of the staining at the apical membrane.

Application = Immunohistochemistry
Dilution = 1:100 – 1:200
Intended Use = Research Use Only

The Angiotensin-converting enzyme 2 gene (ACE2) is located on Xp22.2 and codes for a dipeptidyl carboxypeptidase located at the surface of endothelial and other cells. The primary function of ACE2 is to counterbalance the Angiotensin-converting enzyme (ACE). ACE cleaves the angiotensin I hormone into the vasoconstricting angiotensin II. ACE2, in turn, cleaves the carboxyl-terminal amino acid phenylalanine from angiotensin II and hydrolyses it into the vasodilator angiotensin. ACE2 can also cleave numerous other peptides such as bradykinin, apelin, neurotensin, dynorphin A, and ghrelin. ACE2 is also involved in the regulation of membrane trafficking of proteins and it acts as the entry point into cells for several coronaviruses. As such, ACE2 is a key host cell receptor for the spike glycoprotein of the coronavirus HCoV-NL63 causing the coronavirus disease 2019 (COVID-19). The binding of the spike S1 protein of SARS-CoV-2 to the enzymatic domain of ACE2 on the surface of cells results in endocytosis and translocation of both the virus and the enzyme into endosomes located within cells.

The findings described above are this consistent with the RNA data described in the Human Protein Atlas (Tissue expression ACE2)
Immunostaining by using MSVA-919R was detected in all organs/tissues containing epithelial cells (except the adrenal gland).

Positive control = Kidney: Cells of proximal tubuli should show a moderate to strong ACE2 immunostaining with accentuation of the staining at the apical membrane.

ACE2 immunostaining is most commonly seen in papillary and clear cell renal cell carcinoma (>90%), colorectal adenocarcinoma (>75%) and also occurs at a relevant frequency in gastric and pancreatic adenocarcinoma. ACE2 expression can also be found – often at lower levels – in a large variety of other tumor entities.

The TCGA findings on ACE2 RNA expression in different tumor categories have been summarized in the Human Protein Atlas.

No data available at the moment

IHC users have different preferences on how the stains should look like. Some prefer high staining intensity of the target stain and even accept some background. Others favor absolute specificity and lighter target stains. Factors that invariably lead to more intense staining include higher concentration of the antibody and visualization tools, longer incubation time, higher temperature during incubation, higher temperature and longer duration of the heat induced epitope retrieval (slide pretreatment). The impact of the pH during slide pretreatment has variable effects and depends on the antibody and the target protein.

All images and data shown here and in our image galleries are obtained by the manual protocol described below. Other protocols resulting in equivalent staining are described as well.

Freshly cut sections should be used (less than 10 days between cutting and staining). Heat-induced antigen retrieval for 5 minutes in an autoclave at 121°C in pH 7,8 Target Retrieval Solution buffer. Apply MSVA-919R at a dilution of 1:150 at 37°C for 60 minutes. Visualization of bound antibody by the EnVision Kit (Dako, Agilent) according to the manufacturer’s directions.

Evidence for Antibody Specificity in IHC

There are two ways how the specificity of antibodies can be documented for immunohistochemistry on formalin fixed tissues. These are: 1. comparison with a second independent method for target expression measurement across a large number of different tissue types (orthogonal strategy), and 2. Comparison with one or several independent antibodies for the same target and showing that all positive staining results are also seen with other antibodies for the same target (independent antibody strategy).

Orthogonal validation: For the antibody MSVA-919R specificity is suggested by the strong concordance of the immunostaining data with data from three independent RNA screening studies, including the Human Protein Atlas (HPA) RNA-seq tissue dataset, the FANTOM5 project, and the Genotype-Tissue Expression (GTEx) project, which are all summarized in the Human Protein Atlas (Tissue expression ACE2). Immunostaining by using MSVA-919R was almost exclusively detected in organs with documented RNA expression such as kidney, testis, small intestine, duodenum, colorectum, gallbladder, and seminal vesicle. Further sites of ACE2 immunostaining such as in sebaceous glands of the skin, syncytiotrophoblast, cytotrophoblast, and chorion cells of the placenta, decidua cells, fallopian tube, the caput epididymis, adrenocortical cells, apical cell membranes of few alveolar pneumocytes, a small subset of respiratory epithelial cells as well as in endothelial cells of various organs is not mirrored by RNA data. Most of these structures constitute small subsets of the total amount of cells in these organs and may have been largely underrepresented in RNA analyses.

The only ACE2 findings obtained by MSVA-919R and not confirmed by HPA000288 include corpus luteum and adrenal cortex staining. Based on published images, corpus luteum was probably not analyzed by HPA000288. Based on studies describing a role of ACE2 in corpus luteum, it is likely that ACE2 is expressed in this organ (PMID: 22046052, PMID: 26679819). As neither RNA expression nor HPA000288 staining occurred in the adrenal cortex, this staining by MSVA-919R is considered a (tolerable) cross-reactivity. 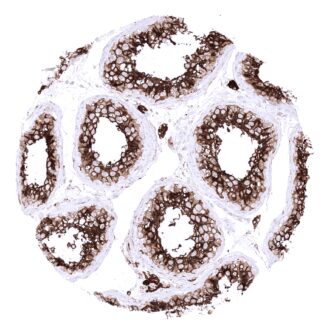